Hopeful days are approaching for the SMA patient Çağan Meriç, who was brought to the agenda by our newspaper. Çağan's doctor, who had been waiting for his medicine to be covered by the state for about a year, received a drug approval certificate from the Ministry of Health.

Çağan Meriç, an SMA patient who was brought to the agenda by Sonhaber Newspaper on July 31, had been waiting for medication for a long time. On August 7, AK Party Deputy Chairman Harun Karacan visited Çağan Meriç's family at home and he stated that he would assist the family in providing the medicine.

CERTIFICATE OF APPROVAL HAS ARRIVED

Saying that a new updated prescription will be prepared with this approval document in the next period, Çağan Meriç's grandfather and SMA Association President Ali Soyer said, “We will personally apply to the Ibni Sina Health Center related to SSI in Ankara with the current prescription. We hope that our medicine will reach us in a week or ten days. We would like to thank Harun Bey for this issue again ” he said. 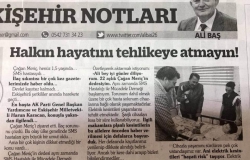