DONATION
Homepage
RECENT DEVELOPMENTS
AFTER THE MEETING OF THE SMA SCIENTIFIC BOARD OF THE MINISTRY OF HEALTH, HEALTH MINISTER FAHRETTIN KOCA MADE A STATEMENT

AFTER THE MEETING OF THE SMA SCIENTIFIC BOARD OF THE MINISTRY OF HEALTH, HEALTH MINISTER FAHRETTIN KOCA MADE A STATEMENT

AFTER THE MEETING OF THE SMA SCIENTIFIC BOARD OF THE MINISTRY OF HEALTH, HEALTH MINISTER FAHRETTIN KOCA MADE A STATEMENT
ASSOCIATION LAUNCH AND PHOTO EXHIBITION
TITCK MEETINGS
HOPEFUL DAYS ARE COMING FOR SMA PATIENT ÇAĞAN MERİÇ
SMA PATIENTS ARE TREATED AT ESOGÜ
NOTICE ON RELATING AN ALTERATION IN THE RESCRIPT OF HEALTH IMPLEMENTATION SOCIAL SECURITY INSTITUTION
YOU ARE INVITED TO OUR SMA AWARENESS EXHIBITION IN ESPARK
PAINTING CONTEST THEMED "LIVING WITH SMA DISEASE" 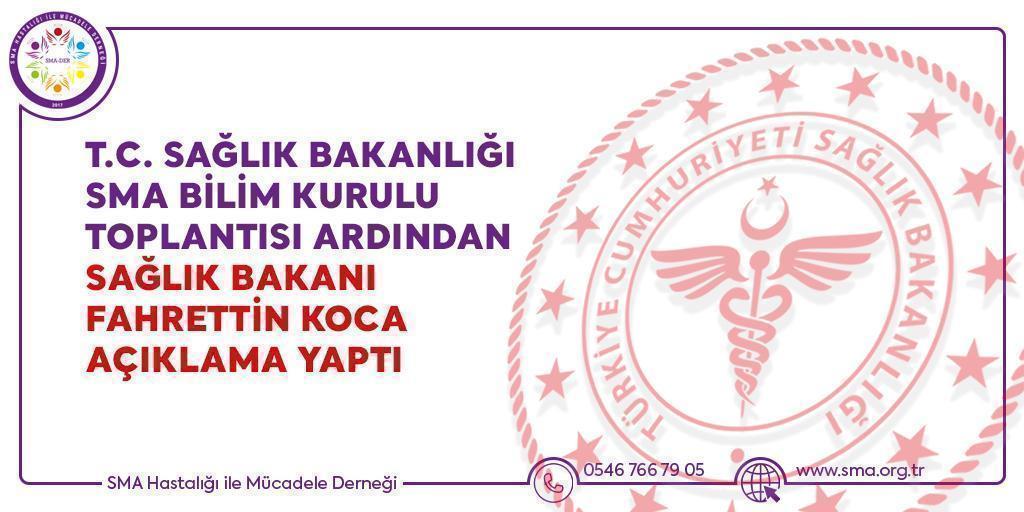 Health Minister Fahrettin Koca made the announcement after a meeting of the SMA Scientific Board to discuss treatment alternatives for SMA patients and screening studies to be launched across the country.

Koca, who stated that a comprehensive meeting was held with the SMA Science Board, made the following evaluations:

"When we talk about SMA patients, we are talking about the most fragile state of life. Every step, every decision and every promise has to take care of this vulnerability. The sensitivity of the issue obliges us all to act with the utmost caution. The decadence in question is conducive neither to generating imaginary hopes from optimism, nor to ignoring the smallest possibility. The constructive thing is the awareness of responsibility and the support received from evidence-based science. Unfortunately, even the opposite may be the case. However, fragile lives are untouchable lives. The hopes of these lives cannot be played with."

Stating that the ministry is acting on scientific data that has gained concreteness about SMA and promises results, Minister Koca emphasized that medicine is constantly adapting itself to new information without taking risks, in accordance with the rule of "avoiding everything that is likely to harm the patient in the light of available information".

"SMA screening is made mandatory before marriage"

Minister of Health Koca recalled that the drug with nusinersen active ingredient, the limits of its effect on SMA patients, was offered free of charge to patients within the scope of reimbursement in Turkey. "Studies conducted for many years and real data from the lives of patients in our country show that the drug can benefit at an early stage. Unfortunately, there is no treatment that is effective in all periods of this disease., "he said.

Emphasizing that providing patients with the best available treatments and making their lives easier, as well as preventing new suffering due to SMA disease, is one of the most important goals, Koca continued her words as follows:

"SMA, which has no cure in the final sense today and is inherited, is a disease that can be prevented. For this purpose, we are implementing the SMA screening program for all couples and newborn babies before marriage. SMA screening is made mandatory before marriage. As a result of screening, couples whose genetic makeup involves a risk of giving birth to a baby with SMA may have children away from this risk by IVF if they wish. The cost is covered by our state. In addition, SMA disease has been included in genetic screenings for diseases for newborn babies. Thus, there will be a chance to catch it at an early stage, when the treatment is effective. The study is being implemented by the end of the month."

Sharing the results of the SMA Science Board meeting, Koca stated that there are treatment options that modify the disease for different types of SMA disease and noted that:

"There is no unmet need for treatment for SMA in our country. since 2017, SMA Type 1 has been treated, and since 2019, SMA Type-2 and Type-3 have been treated in patients. All of the options for nursinersen, risdiplam and gene replacement therapy have been shown scientifically and with real-life data that they show similar effectiveness when used in the first three months of the disease in SMA Type-1 patients. The superiority of these treatments to each other at an early stage has not been shown. The nusinersen active ingredient drug I mentioned will continue to be used for all of our patients as defined in the treatment guide. Some criteria that force patients to meet the 'eligibility to receive treatment' criteria for patients using this drug have been removed. It is extremely important to maintain standard controls for access to treatment."

Stating that the appropriate treatment for the patients identified by the newborn screening will be started immediately and at the earliest possible time, Minister Koca said, "Along with the newborn screening program, infrastructure studies on access to all treatment options are being carried out with utmost dedication. It will be integrated into the health system as soon as possible." said.