SUPPORT FOR PRE-MARITAL SCREENING FROM FAMILIES STRUGGLING WITH SMA 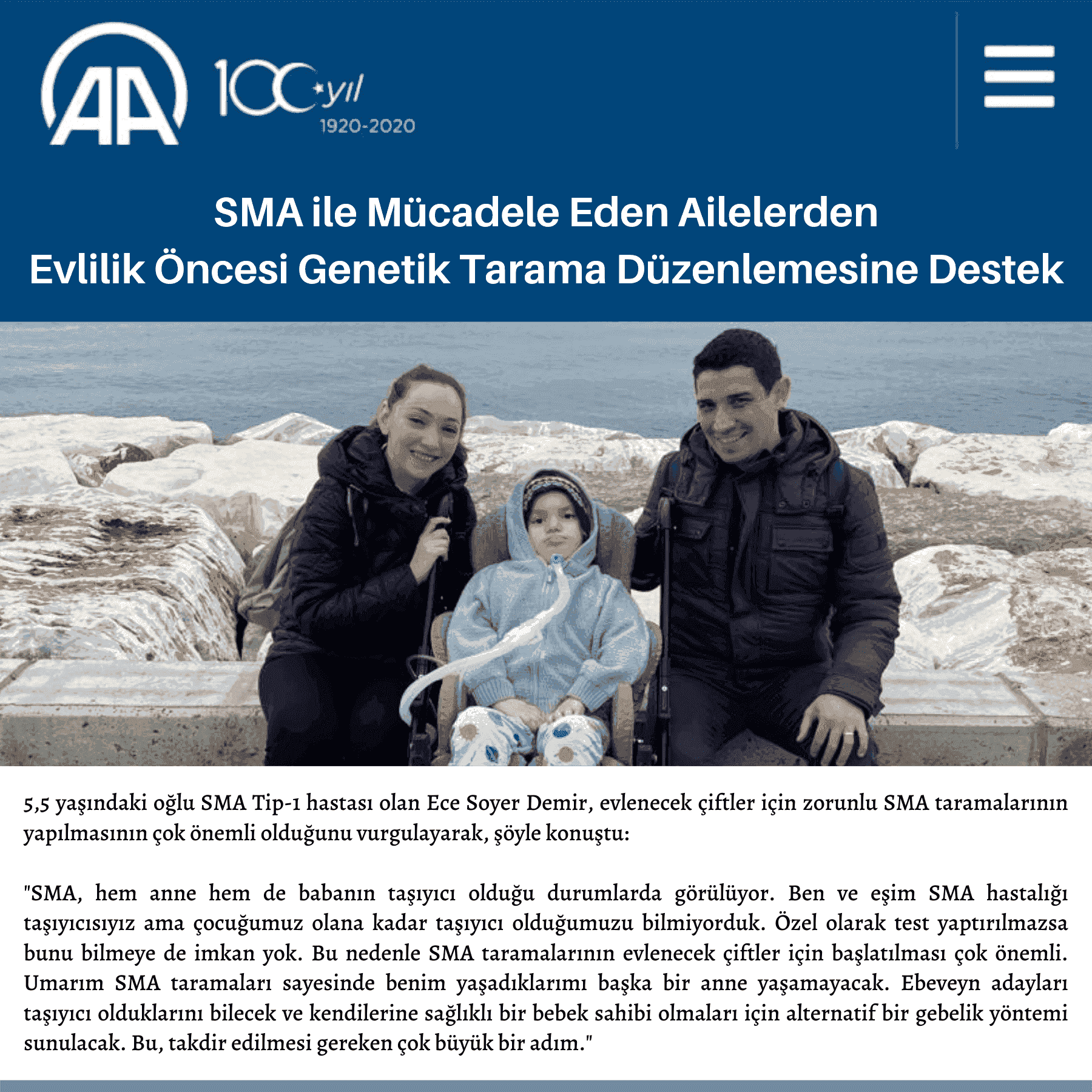 Ece Soyer Demir, whose 5.5-year-old son has SMA Type-1 disease, stressed that it is very important to have mandatory SMA screenings for couples who are going to get married, said:

"SMA is observed in cases where both mom and dad are carriers. Me and my wife are carriers of SMA disease, but we didn't know we were carriers until we had a child. And there's no way to know if he hasn't been specifically tested. That is why it is so important that SMA scans are started for couples who are going to get married. I hope that thanks to SMA scans, no other mother will experience what I have been through. Prospective parents will know that they are carriers and will be offered an alternative method of pregnancy to ensure that they have a healthy baby. This is a very big step that should be appreciated."

Ece Soyer Demir, Deputy Chairman of the Board of Directors of the SMA Disease Control Association, said that Minister of Health Koca "Infrastructure work on access to all treatment options with the newborn screening program is being carried out very selflessly. Regarding the statement "It will be integrated into the healthcare system as soon as possible", they said that they expect current treatment methods to be included in the scope of reimbursement for patients deemed eligible within the scientific framework and to provide an equal and accessible treatment opportunity for all SMA patients.

Demir,"Expectant mothers and fathers who have been found to be carriers by screening will be able to have a healthy child if they want with the Preimplantation Genetic Diagnosis (PGD) method, which is a method similar to IVF and is covered by the state. This is a rather costly method, it makes a lot of sense to be covered by the state." he used the expression.

Demir, who explained that genetic examination was performed on embryos using the PGD method and as a result of this examination, healthy embryos were transferred to the womb of the expectant mother, recalled that PGD was reimbursed by the SGK in August.

Demir noted that they have long expressed the need to conduct both screenings to reduce the incidence of the disease, and to ensure that the PGD method is covered by the state.

Ece Soyer Demir, noting that it has been proven by clinical studies that the drugs used to treat SMA disease give much more successful results when applied at an early stage, said:

"We know from clinical studies of all three treatments that patients who have acquired motor skills at basic points such as independent walking, independent sitting are patients who were diagnosed during pregnancy or during the neonatal period and started treatment immediately after. The earlier treatment is started in patients, the more successful results are observed. There is a very serious difference between a baby with SMA who started taking the drug at the age of 1 dec and one who started at the age of 2 months. For this reason, the delivery of SMA scans to newborns is a very important and meaningful step in order for them to have access to early diagnosis and early treatment."